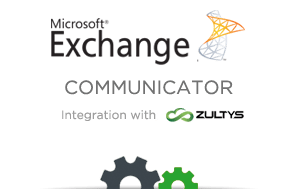 MS Exchange® integration via MS Exchange Communicator (MSEC) allows MX users to have their voice mails and faxes automatically delivered and synchronized to their email client on Windows based PCs. When a user reads or deletes the email message on their PC, the voice mail / fax message state on the MX system will reflect the change.

MSEC 2.0 and later supports integration with MS Exchange 2010 SP1 and later, as well as MS Exchange Online. The MSEC application must be installed on a host PC running Windows XP Pro or later (machine must be able to join Domain). The MX system must be running Release 9.0 or later.

Event Sequence for Delivery of Messages


Whether your organization is in the Public or Private Sector, Zultys’ feature-rich Unified Communications solution will supercharge your Contact Center by increasing efficiency, productivity & customer support.